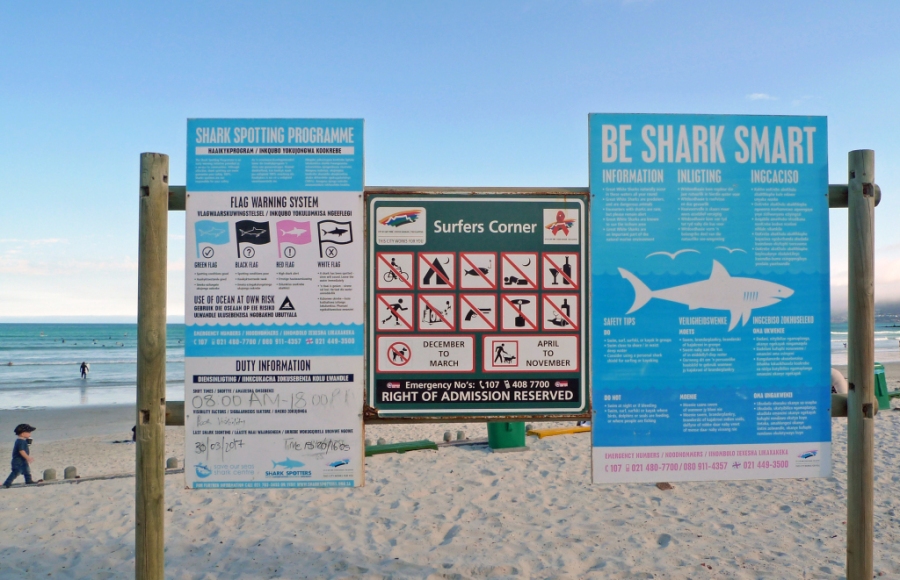 Don’t make a trip from Somerset West to Boulder’s Beach on a New Year’s Day unless you want to drive very slowly! When you get there, do not swim too far from the beach or you might be bitten by a shark!

It turns out everyone else had the same idea. Everyone, from the townships of Khaylitsha and Mitchell’s Plain to quirky Muizenberg and Fish Hoek was either crossing the road to get to beach or driven close by it, if not to see the penguins, then at least to see one of those beach-kind of weddings. (Turns out 1st January is a very popular day for weddings in Western Cape – and yes, I am writing this blog with a 5 weeks delay!).

The weather was very hot, the wind was very strong and we watched it all from the window of the Ford Fiesta for two hours until we arrived in Simon’s Town.

The townships were on a scale unimaginable and it was a wake up call for those tourists  have so far seen only the manicured vineyards and farms around Stellenbosch.  Repeated rows of corrugated steel roofs and tilted electrical poles seeped into the blue mountains horizon somewhere in the far, far distance. People, young and old and children walked to places and judging by the size of their rucksacks they were used to some distances. A groups of youth was heading for beach and whistled past the queue of slow traffic. 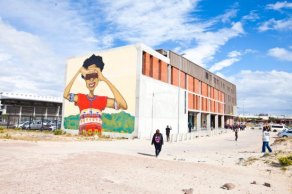 Not far from the Mitchell’s Plain there was a Muslim wedding. The bride’s dress was being thrashed by the unforgiving Atlantic wind, the veil lifted around her face and I was tempted to come out of the car, if only to take a photo, but of course, that’s when the traffic started to move and the kids said I was a ‘weird wedding crasher with a lousy camera’.

In Muizenberg, another wedding party was walking up a hilly street, some men were wearing Jewish caps, others had no head coverage including the groom who was Black. Muizenberg looked like a place where everyone wanted to be seen eating a posh meal opposite the beach. I recognised the colourful beach houses, I have seen them in pictures before. I never knew there was a large Jewish synagogue. 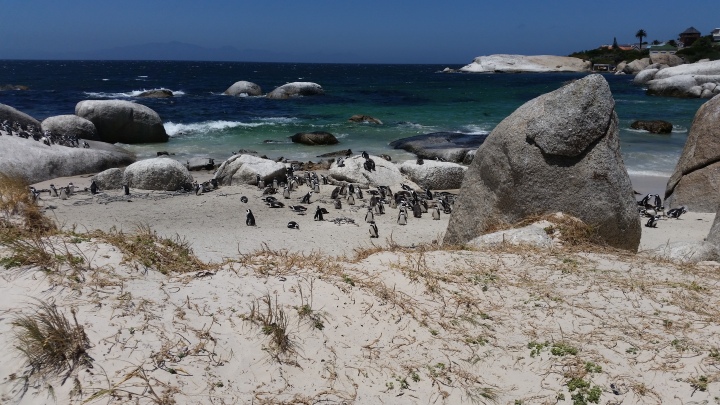 We carried on along the coast, just like the trains on the coastal railway did and it was somewhere there we saw the Start of the Sea Catholic Convent School that looked completely out of place as we concluded that surely, no one ever goes to school in such a stunning tourist spot. Shark spotters and black flags were everywhere, a number of surfers have been bitten/eaten in around False Bay, I was told, in recent years.

The only thing to say now is that we did finally arrive at Simon’s Town and parked up our car on the curb very badly. We joined the queue to see the penguins at Boulder’s Beach, together with a hundred or so fellow tourists. I began to wonder why is it that children always decide to throw tantrums just after their parents buy the expensive tickets. I had this idea that we would be strolling the beach and the penguins would congregate before our eyes just like they do in Happy Feet. And whilst we did see them dotted around the large rocks, we had to obey the long queue and listen to everybody else’s child wanting to see them up close (in addition to our own).

Still, our photos were worth it and we got to eat our picnic food further down on the Boulder’s Beach.

Having rested on the sand, windswept and wind-burnt, we drew up to the Cape of Good Hope which is the place where mountain peaks meet with clouds and mists. It is not everyday I can say we’ve driven through clouds, but we definitely did – on 1 January 2018!

In case you wonder why I haven’t taken more photos of all these events, there are two reasons – 1. I was sitting in the car for most of the journey; 2. when we finally arrived, my battery run out!